Tomic To Try to Qualify for Australian Open 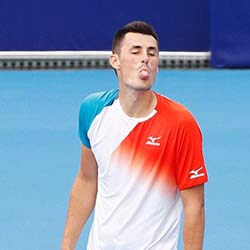 Bernard Tomic has been working on his comeback to the world of professional Tennis for the last 12 months. The next step in his journey is qualification for the rescheduled Australian Open, so that is the direction he is headed in.

The next stop is Doha, the capital of the State of Qatar, where Tomic will be joining 11 other hopeful Australians trying to qualify for the Australian Open offshore. The event itself has been moved out of Melbourne due to issues related to COVID-19. Qualifications will be unfolding in Doha from January 10 to January 13, 2021. Akira Santillan and Jason Kubler from Queensland, Andrew Harris from Victoria, and Matt Ebden from West Australia are just a few of his competitors hoping to make the cut as well.

These players will need to win three sudden-death games and the 16 athletes who manage to qualify will need to be able to travel to Australia along with six alternates for two weeks of mandatory quarantine. The rescheduled Open will take place from the 8th of February 2021 to the 21st.

Tomic held the world no. 17 position as of the 11th of January 2016 but has since dropped down to no. 226. He’s been hard at work getting back to full fitness by taking part in various lower-profile events in Brisbane. Tomic’s been struggling with the back injury which forced him to drop out of the UTR Pro Tennis Series tournament in Brisbane during his warm-up.