Carlos Sainz Well On Track For A Win 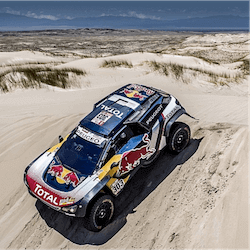 Mere days ago, Stephane Peterhansel appeared to be well on his way to yet another Dakar Rally victory, what would have been his 14th, to be exact.  At the end of the first week of the competition he was sitting pretty in a 27-minute lead over Peugeot team-mate Carlos Sainz.  But then came Day 7 and along with it came doom and gloom as he sustained serious suspension damage to his buggy whilst trying to avoid hitting a stationery quad bike.

Team-mate Cyril Despres was on hand with spares and support but it proved to cause too much of a time delay, effectively causing Peterhansel to drop into third place overall, as well as having fallen behind race leader and fellow Peugeot team-mate Carlos Sainz by an entire hour and twenty minutes.

Since the unfortunate incident, Peterhansel has managed to regain slightly, moving back into second place overall.  However, he holds no preconceived ideas about being able to catch back up with Sainz.  Sainz was recently slapped with a 10-minute penalty after having been accused of being involved in what was referred to as a near-miss by some and a hit-and-run by others. He has however since been acquitted of the penalty and the 10-minute delay was reversed.

Peterhansel said that the biggest challenge now was the fact that Sainz was driving exactly the same car as he.  They are both professional drivers for a world-renowned team, which makes mechanical failure the only eventuality that would see Peterhansel catching up with Sainz now.  He said that it was a technical impossibility to try and make up for an hour’s worth of time over the course of the three remaining stages, especially since these were flat-out stages and not technical ones littered with dunes and other obstacles.

A second place overall isn’t bad after all, considering the fact that this takes into account the hour-long delay.

Ten Brink said afterwards that it was a fantastic feeling to have won one of the most difficult stages of the Dakar and that he had been very satisfied with the co-operation between himself and his team-mate and navigator.