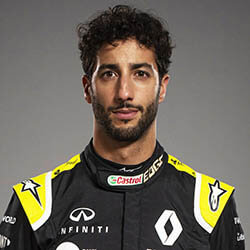 Former team Renault driver Daniel Ricciardo has explained his reasoning behind the surprising decision to embrace a $32 million pay cut by ditching Renault for McLaren for next year’s Formula 1 season. The F1 driver on Friday told a sports broadcaster that if it meant he would be able to get behind the wheel of Mercedes’ seven-time world-title car, he would even drive for free.

Currently ranked fourth in the world, the former Red Bull star is in top form following his nearly single-handed propelling of Renault into third place in the constructor championship. The young driver recently had to make a decision regarding who to race for next year between Renault and McLaren – and all without having as much as driven either of the two cars on the menu for the upcoming 2021 season.  Ricciardo is however convinced that he has managed to go with the best decision by deciding to make the switch.

The young driver has said that he hopes to become part of a McLaren team capable of challenging the dominance of Mercedes once upcoming new regulations are enforced in 2022. Being able to give Mercedes a run for their money was apparently the biggest drawcard for Ricciardo – who is rumoured to have weathered a pay-cut equal to a whopping AUS$49 million spaced out across the next two years.

Wanting to win and being able to work towards the goal of being in the position to make that happen, said Ricciardo, should always enjoy priority over the value of a contract and money.