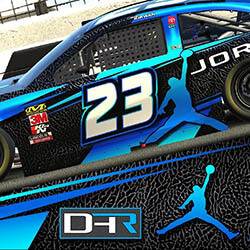 Basketball legend Michael Jordan is reportedly spreading his wings – away from the court and onto the NASCAR racetrack.

Jordan, who currently owns the Charlotte Hornets, has confirmed himself in the process of setting a NASCAR Cup Series team in partnership with Denny Hamlin, a three-time Daytona 500 winner. And as for the single driver set to represent the new team, Hamlin said it was always going to be Bubba Wallace.

Wallace, currently the only Black full-time NASCAR driver racing at top level, earlier this month announced his stepping away from Richard Petty Motorsports. Wallace shortly after the announcement by Jordan and Hamlin confirmed the news on his official Twitter page. He described the opportunity to join the Jordan-Hamlin team as a unique adventure and one that just so happens to be a “great fit” in terms of where his career is currently at.

Jordan’s involvement is significant as it marks the first Black majority team owner in NASCAR since the 1960s/1970s, i.e. the era of Hall of Famer Wendell Scott. A self-professed NASCAR fan his entire life, Jordan described in a statement how he still remembers being taken as a young child growing up in North Carolina to the races by his parents and with his brothers and sisters in tow. All of which now contributes to Jordan’s excitement over teaming up with friend Denny Hamlin and race car driver Bubba Wallace.

Jordan added that he sees his involvement with the team as a chance to educate a whole new audience about the perils of systematic racism.