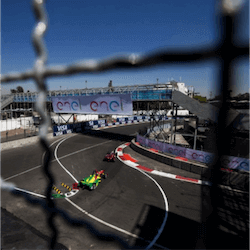 Despite having been around since 2014, Formula E racing is still a fresh concept for many. The Formula E Championship differs from the conventional Formula 1 Championship in that it uses only electric-powered cars. The general idea right from the onset was that it would stimulate the market for electric cars as well as push technological developments in the electric car sector. Battery development technology, especially, has been a key focus point.

Despite the proposed advantages to the electric-powered car industry, some of which have already become apparent, Formula E racing is highly entertaining, most notably due to the fact that the playing field is usually made up of contemporary inner-city street circuits.

Mexico’s capital and the Autdromo Hermanos Rodrguez circuit is next up on the 2018 Formula E calendar, getting underway on 3 March. DS Virgin Racing will once again be part of the action, with Sam Bird and Alex Lynne hoping to gun for an all-British victory.

Bird currently occupies third place in the overall driver-standings and will no doubt be hoping to at least duplicate his result of last year, when he finished in third place. Lynne, on the other hand, will be looking to regain his good standing after having experienced mechanical failure at last month’s fateful Santiago race, forcing him to retire early from the race.

Mexico City is one of only two instalments in the competition where the race takes place on an actual circuit track and not in the city streets. This excites Sam Bird, who has expressed the opinion that Mexico is one of the best stops on the Formula E calendar, mainly due to the presence of amazing fans. Bird said that the team hoped to once again achieve a podium position in Mexico, as was the case last year.

DS Virgin Racing Performance Director Xavier Pinon pointed out that the circuit in Mexico was a particularly technical one due to the difficulty it poses especially to overtaking. Pinon stressed the importance of a obtaining a decent qualifying result as well as the proper management of the extremely high temperatures on the track. During times of high temperatures, component cooling becomes the most important aspect to take care of from a technical support point of view.

The Mexico City race is the 5th round of the 2018 ABB FIA Formula E Championship.