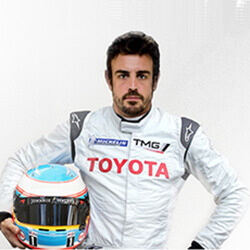 The rumours came about due to the fact that Toyota has never won at Le Mans before, and by winning with Alonso the brand would receive much wider coverage than other teams taking part in the race.

A spokesperson for Toyota has come forward to deny the claims, however, stating that both of their cars that are participating will start with an equal and fair chance of winning. They went on to say that their goal is for the cars to race to the finish line with the hopes of achieving a Toyota one-two.

Alonso, a two-time winner of F1, will be sharing his car with another ex-F1 driver, Sebastian Buemi, who hails from Switzerland. Alongside these two will be Kazuki Nakajima of Japan and British Mike Conway, who was an F1 test driver for Honda. Kamui Kobayashi and Jose Maria Lopez will also be taking part.

Alonso has been on a roll over the last few months, having first won the World Endurance Championship, which is is a precursor to the Le Mans. Toyota ordered their other drivers to hold back during the race to ensure Alonso crossed the finish line first. Toyota will be almost without any real opposition in the Le Mans due to them leading the LMP1 hybrid class, which have a series of handicaps.

Formula E Motor Racing Despite having been around since 2014, Formula E racing is still a fresh concept for many. The Formula E Championship differs from the conventional Formula 1 ….