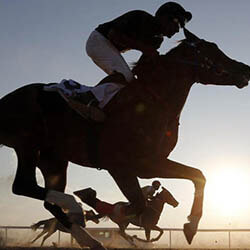 Female jockeys will be encouraged to participate in the latest Saudi Cup with the hopes of winning the $27 million prize. The Saudi Cup will be the richest race in the world, and will be taking place in Riyadh, the capital of the nation, at the end of February next year. Saudi Arabian Prince Bandar has stated that female jockeys would be most welcome at the event, a bold statement in a country that has faced criticism in the past over its treatment of women’s rights.

The Prince told reporters that the event was being held to try and transform the country, and that men and women will be treated equally. A promotional event taking place in London as attended by a number of racing figures, which included trainers Sir Michael Stoute and John Gosden, along with famous rider Frankie Dettori. It markets the latest in a series of sporting events that are to be held within Saudi Arabia, including boxing world heavyweight title rematch that will see Andy Ruiz and Anthony Joshua duke it out in December.

Many are viewing the sporting events as ‘sportswashing’, an attempt from the nation to try and deflect criticism elsewhere. There are heavy restrictions on freedom of expression as well as women’s rights, and the use of the death penalty can still be used for even seemingly minor offences. Prince Bandar has stated that the country is preparing for a more open, inclusive era in the future.