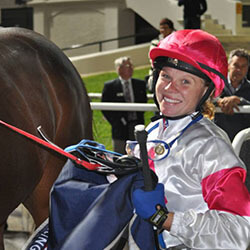 While the 10 and 1/2 week shutdown has felt like an eternity to all participants, to Hayley McCarthy it is just that much more time that she is forced to spend on the sidelines. The jockey hasn’t competed in a race for 21 months now, after she broke her foot in a trackwork accident while she was at Longford.

McCarthy made a comeback at last week’s Spreyton Trials and even rode a few of the winners but when, or if, she’ll be fit to race again is not yet known.

The jockey explained that she broke the talus bone in her foot, possibly the worst one in terms of her profession. She explained that although the bone has healed, she suffers from quite a bit of arthritis in the affected foot, and this has affected her racing abilities. She said the worst part is that it’s so unpredictable, with things seeming perfectly okay one minute and then flaring up out of nowhere the next.

The injury happened when McCarthy was coming off the Longford training track, with the horse getting frisky and rearing, slipping, and falling on top of her.

Strangely, this foot injury has given the jockey far more hassles than the broken back she suffered back in 2016, in another trackwork accident. The horse she was riding suffered an exercise-induced pulmonary haemorrhage and smashed through the running rail. McCarthy fractured her T6 vertebra but was back in the saddle just four months later.