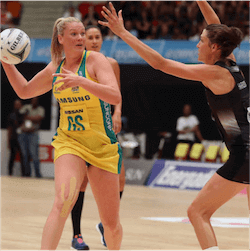 Proteas Are Strong And Experienced

It is a strong and experienced Proteas squad that will be taking on England in the Quad Series in Johannesburg, South African on January 28th.  Netball South Africa (NSA) recently announced the 12-member team, with Shadine van der Merwe being the only new cap to have been included in the group.

Due to the time of the year, with no club Netball being played over the festive season, it’s always a tricky business to maintain fitness levels over the December / January period.  But Proteas head coach Norma Plummer has said that the amount of work that the team had managed to put in irrespective, was impressive, and that they had done a fantastic job at keeping fit.

Plummer said that she was especially thrilled at the inclusion of shooter Danelle Lochner, who had been included in the U-21 team who competed for South Africa in Botswana last year, and subsequently had been included in the training camps after the National Championships had drawn to a close.  Plummer said that Lochner had literally forced her way into being selected for the team and that she was a strong-willed player, which was what South Africa needed, the kind of player that did not back away when the pressure was turned on.

Exposure Pays Off For Venter

Shooting prodigy Ina-Marie Venter is another player warming Plummer’s heart.  She’s currently the best-ranked shooter in the squad, and according to Plummer, is proof that travelling with senior players pays off for a junior player as she has improved immensely since last year’s Quad Series.

Maryke Holtzhausen has also been included in the team, after having successfully recovered from a knee injury.  Holtzhausen is a key player in the squad.

South Africa will go up against England on January 28th at South Africa’s Ellis Park Indoor Arena in Johannesburg.

England Not Off To A Great Start

England will have to step it up a notch if they are to successfully recover from the 50-46 loss to Australia during the second match of this year’s Quad Series.  They had started out strong, having beaten New Zealand’s Silver Ferns before chasing down what they were hoping to be a first victory over Australia since 2013.  But it was not meant to be.

By the time that break-time rolled around they were trailing behind at 28-21 and fighting an uphill battle in the shooting department.  England fought back valiantly, but Australia was just too strong a team to trump.

England will have to really pack it in when they go up against South Africa if they are to avoid another nasty surprise.

England netball captain Serena Guthrie has announced her retirement. The 32-year-old also announced that she is pregnant with her first child. Guthrie played a leading role in helping the Vitality ….