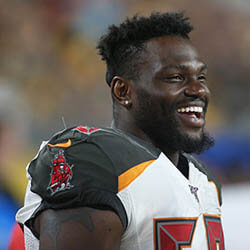 We know and love Shaq Barrett because he’s currently the reigning sack leader and the player is also one of five National Football League players that still need to sign their franchise tag tenders. It’s likely that this will happen by the end of the week.

Chatting to Colleen Wolfe on Wednesday the 26th of June on NFL Total Access, Barrett said that things are currently up in the air, about 50-50. He stated that he’ll be getting more information today, which will allow him to make a decision.

As things currently stand, Barrett’s franchise tag remains unsigned, along with A.J. Green, the wide receiver for the Cincinnati Bengals and Chris Jones, the defensive tackle for the Kansas City Chiefs. Defensive end Yannick Ngakoue, who plays for the Jacksonville Jaguars and Justin Simmons, safety for the Denver Broncos find themselves in the same boat.

In the five previous seasons that Barrett has spent with the Broncos, he’s only started 15 games, but began all 16 in 2019, a feather in his cap that saw him setting a new single-season standard for sacks by a Buccaneer. Barrett surpassed Warren Sapp’s 2000 record of 16.5 with an incredible 19.5. His 37 QB hits were also first in the NFL and his six forced fumbles third. Last season saw Barrett impacting the game as much as anyone of his peers, with his 68 QB pressures ranking third in the league.

Now he’s weighing up a tender worth almost US$16 million and he and his team have until the 15th of July to work out a long-term agreement.