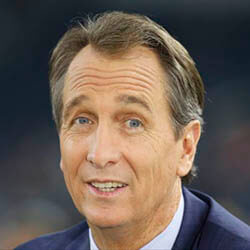 NFL commentator and former American footballer Cris Collinsworth has come under fire for saying he was blown away by how much women in Pittsburgh knew about football. He made the controversial comment during Wednesday’s NBC-aired broadcast of the game between the Steelers and the Ravens.

Commenting live during the second quarter of the game, Collinsworth spoke about how impressed he was by the sorts of questions asked by especially the female fans that he had met during his time in Pittsburgh. He was soon after his comments left with no option but to a turn-around and explain what he head meant by his supposed surprise at the knowledge of female football fans. This after the comments caused an outpouring of criticism on social media, with Collinsworth’s comments labelled sexist and patronising.

He later on explained that he had intended what he had said as a compliment, and not an insult. He said that he was fully aware of how much harder female journalists had to work in order to achieve any form of recognition in the industry, and as such, offered his deep and heartfelt apology to all he had managed to offend.

Wednesday’s incident is the second time this season the 61-year-old has faced extreme backlash for inappropriate and questionable comments made on air. He in October joked around with fellow broadcaster Al Michaels about having to wear a mast on set as per an ordinance issued by California’s Santa Clara County. He came over as annoyed with having to comply with the rule.

The NFL team formerly known as the Redskins will be holding on to its famous colour-combination of burgundy and gold, but not to its infamous former name. The team has ….