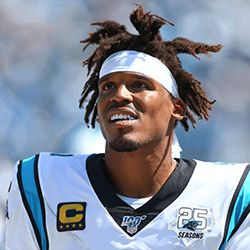 Cam Newton is a free-agent quarterback no more thanks to signing a one-year contract with the New England Patriots. The incentive-laden agreement will see the 2015 Most Valuable Player challenging Jarrett Stidham, the 2019 four-round pick, and Brian Hoyer for the starting job. This position is now vacant thanks to Tom Brady, three-time MVP, leaving, taking up free agency and joining the Tampa Bay Buccaneers. Stidham played in three of last year’s games and completed two passes for 14 yards and a single interception.

Informed sources say that Newton’s contract may be worth as much as US$7.5 million. Newton let his feelings about the signing be known on Instagram on Monday the 29th of June talking about his excitement and praising God.

Newton turned 31-years-old in May 2020 and is a former No. 1 Overall Draft Pick. He has thus far spent the whole of his nine-year pro career with the Carolina Panthers but was released by them in March when they signed Teddy Bridgewater. Newton has a year remaining on his $103.8 million contract, but the Panthers saved just less than US$20 million under the salary cap releasing him when they did.

The Newton Auburn University Heisman Trophy winner passed for 45 touchdowns with the Panthers and led them to the Super Bowl during a glittering 2015 campaign. But he’s had some tough times with injuries since then, missing 14 games last season because of a foot alignment issue. He also played the last two games in 2018 with a torn rotator cuff that he eventually needed surgery for.