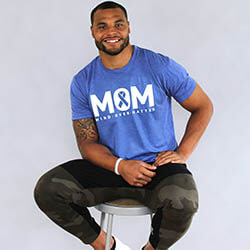 Rayne Dakota Prescott, nicknamed Dak, has made his exclusive franchise tag with the Dallas Cowboys official. The 26-year old Quarterback signed the one-year offer on Monday the 22nd of June 2020, the team reported, in an expected move after the team’s virtual offseason came to an end. Had Prescott held out beyond the spring programme, which he eschewed, he wouldn’t have followed this path. The fact that he didn’t means that he’ll be attending the first training camp, run by Mike McCarthy, in Dallas.

Prescott and the Cowboys have until the 15th of July to work out the details of the long-term contract but Prescott will simply play the 2020 season on the franchise tag if they fail to do so. The Cowboys could even reuse the tag in 2021 if a multi-year deal isn’t reached, the way they’ve done eight times since 1993 on six different players.

NFL Research reveals that they followed this course of action twice each with Anthony Spencer and DeMarcus Lawrence and worked out sustained deals in three of the previous seven instances with Dez Bryant, Ken Hamlin, and Lawrence. Two of these three extended contracts, with Bryant and Hamlin, got signed on the July 15th deadline.

Prescott’s signature on the franchise tender makes him the ninth of a total of 14 tagged players to settle on one-year deals ahead of next month’s deadline. Adriel Jeremiah A.J. Green, Chris Jones, Justin Simmons, Shaquil Barrett, and Yannick Ngakoue make up the remaining five.