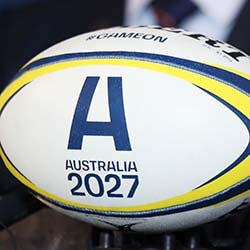 Australia has been named as the most likely country to host the men’s 2027 Rugby World Cup after the governing body announced that the country was the preferred candidate for the tournament. As part of a new selection process, the council for World Rugby has set a “preferred candidate” phase of the process, which essentially gives a country the go-ahead to begin working with the governing body in preparations for the international event.

England has also received similar backing to host the women’s Rugby World Cup, which is set to take place in 2025.

Australia has been vying for the candidacy against the United States for the event, but the council had virtually ruled out any competition by the two by indication that the United States would most likely be the hosts for the event in 2031. They also announced that exclusive targeted dialogue would persist with the US regarding their potential hosting of the event, as well as for the women’s tournament over the course of the next few years.

The rights to hosting will be given out in May of next year, but the most recent decision does mean that Australia can begin their initial preparations for the sporting event. Chairman of Rugby Australia, Hamish McLennan, stated that this was a once in a generation opportunity and that they were now closer than ever to taking their dreams and making them a reality. The reveal comes just six months after Australia launched their bid, which was done along with a number of community events that took place around the country, which included involvement with the Wallabies.