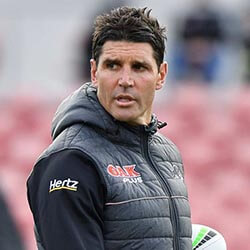 He intends to remain a man true to his word, says incoming Bulldogs coach Trent Barrett, and as such also committed to the embattled franchise. This despite Phil Gould’s dooming words of warning over his (Barrett’s) intentions of getting involved with what Gould has described to be a “toxic mess”. Barrett recently signed a three-year contract that will see him coach Canterbury come next season – this following the sacking of former Bulldogs coach Dean Pay.

And if Gould has ever been on the money about anything, then it has to be that the Bulldogs are in a whole lot of twang – on the field as well as away from it. So much so that a so-called “civil war” now appears to be looming imminently on the horizon; one being driven ever forward in the direction of a point of absolute crisis by club boss George Coorey and football chair and arch-rival Lynne Anderson.

Even the relationship between franchise chief executive Andrew Hill and football GM Steve Price now appears to have turned severely awry. But Barrett, ever eager to come across as a man unwilling to shy away from his commitments, says he’s one hundred per cent committed to staying put in camp Canterbury.

And it’s exactly this dogged determination, says industry veteran Phil Gould, that may ultimately mean the final undoing of an inexperienced and certainly naïve Barrett. Given what all had gone down during his previous stint while serving Manly, explained Gould, Barrett would be a great deal better off staying put at Penrith for a few more seasons.

Aussie journalist Paul Kent says he not only believes Wayne Bennett to be interested in making a Broncos return, but moreover, that the wheels for Bennett’s return either in 2021 ….

Broncos club legend Chris Walker has said in so many words that Brisbane coach Anthony Siebold simply isn’t cut from the right stuff required to lead the club. This at ….