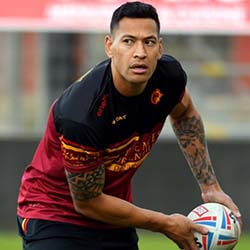 Last month, Israel Folau was released from his Catalans Dragons contract to resume his Australian rugby career. He has, however, since with the Japanese club NTT Communications Shining Arcs.

Folau had previously been fired from the Australian team in 2019 as a result of homophobic comments. The Catalans Dragons offered him a lifeline for the 2020 season even though the decision was strongly opposed. The French team has since released him from his contract to give him the chance to resume his Australian career. He had played a total of 15 matches, missing out on the remaining two. Folau had agreed to a contract extension that would have taken him to the ned of 2021, however, the Dragons let him miss the start of the season to deal with family matters.

The dual-code international and former Wallabies full-back has announced his return to rugby union next season and has signed with Shining Arcs in Japan to do so. He started by playing rugby league, switched to Australian Rules in 2011 and moved to rugby union in 2013.

Last week, Folau resumed his career in Australian rugby by playing for the amateur rugby league club Southport Tigers. Former New South Wales Waratahs coach Rob Penney will be joining him in Japan as the Shining Arcs’ director of rugby.

With Folau making so many changes to his career in the last few weeks, we can only wonder if this change will last or if he will surprise us with yet another shocking announcement. Only time will tell.