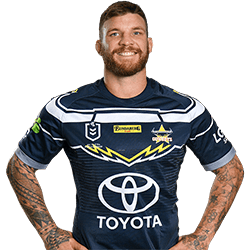 Andrew McCullough says former teammate Josh McGuire would be a welcome re-addition if he were to make a Red V comeback in the coming weeks. McGuire has endured a harrowing and frustration-laden month in Townsville – and to the point of recently calling out his side for having what he referred to as a “soft underbelly” in the aftermath of their Round 3 defeat at the hands of the Titans.

And if the Titans loss had been bad, then their performance against Cronulla had been the pits, as voiced by the former representative forward while shooting sharp words at teammate Francis Molo for a disappointing offload that ultimately led to a fate-deciding error.

McGuire may actually have a road wide open for his early departure if North Queensland coach Todd Payten’s post-game words are anything to go buy. Payten confirmed that a conversation with McGuire’s management had already been opened about the possibility of an early release, and that the club would not stand in the way of alternative opportunities.

Given McGuire’s links with coach Anthony Griffin and veteran players McCullough and Ben Hunt, a landing spot at the Dragons appears highly likely at this point in time. McCullough said McGuire would complement the Dragons’ current physical pack – but even so, stressed that he (McCullough) had no say in recruitment decisions either way. McCullough, who has himself suffered through a recent bout of losing streaks and injuries, clearly has a great deal of understanding and even sympathy for his former teammate.

No Fans For Kangaroos And Dockers

Fans won’t get to enjoy attending Saturday’s game between North Melbourne and Fremantle because of a new 3-day lockdown period just announced for Perth. The game will reportedly still be ….

Warren Gatland says Andy Farrell could still be called up to join the coaching staff for the upcoming British and Lions tours to South Africa in the summer. Farrell late ….

A message from Black Ferns team management sent out on Wednesday morning changed “everything”. So said Black Ferns leaders Kendra Cocksedge and Eloise Blackwell after learning of the disappointing news ….

The woman accusing NRL star Jack de Belin of sexual assault has testified before a court that she remains unable to sleep at night even now – nearly two years ….

Rugby Australia chair Hamish McLennan says he’s frustrated by the ongoing tensions between his organisation and New Zealand Rugby. The relationship between the two organisations is the poorest it’s ever ….