No Fans For Kangaroos And Dockers 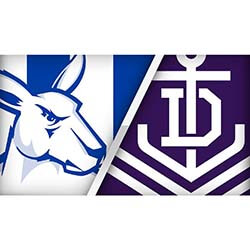 Fans won’t get to enjoy attending Saturday’s game between North Melbourne and Fremantle because of a new 3-day lockdown period just announced for Perth. The game will reportedly still be permitted to proceed.

The newest lockdown measure was announced after three people tested positive. One of the three people has reportedly in the meantime flown out to Melbourne. The Perth lockdown has been confirmed as about to last for three days staring at Midnight on Friday evening.

The Victorian had apparently contracted the infection while staying over at a hotel for quarantine in Western Australia.

Premier Mark McGowan announced the lockdown via a press conference on Friday afternoon, saying also the infected Melbourne man could very well have been ill and infectious for around 5 days following his departure from the hotel where he had been staying in isolation.

Since Perth residents have been allowed only four permissible reasons to leave their homes, fans won’t be attending the match-up between the Kangaroos and the Dockers. McGowan said on Friday that while he realised full well that people are going to be disappointed by the latest stay-at-home order, the hope was that the period behind doors can be limited to the three days only.

Residents of Perth and Peel have been instructed to wear masks from Friday until Monday.

The NBL and Super Rugby matches scheduled to be played in Perth on Friday will be allowed to admit fans, but no fans will be able to attend the AFL game at the Optus.

Warren Gatland says Andy Farrell could still be called up to join the coaching staff for the upcoming British and Lions tours to South Africa in the summer. Farrell late ….

Andrew McCullough says former teammate Josh McGuire would be a welcome re-addition if he were to make a Red V comeback in the coming weeks. McGuire has endured a harrowing ….

A message from Black Ferns team management sent out on Wednesday morning changed “everything”. So said Black Ferns leaders Kendra Cocksedge and Eloise Blackwell after learning of the disappointing news ….

The woman accusing NRL star Jack de Belin of sexual assault has testified before a court that she remains unable to sleep at night even now – nearly two years ….

Rugby Australia chair Hamish McLennan says he’s frustrated by the ongoing tensions between his organisation and New Zealand Rugby. The relationship between the two organisations is the poorest it’s ever ….