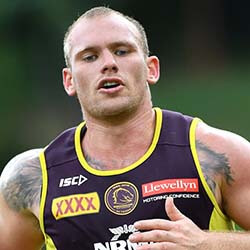 In a shocking turn of events that come just days after Kevin Walters had told reporters that Matt Lodge would be staying with the club, Lodge has announced his official contract termination with immediate effect as he joins the Warriors.

While the world scratches its heads at this recent announcement, Lodge has taken the time to thank the Brisbane Broncos for the time spent with them. Team CEO Dave Donaghy has said that the opportunity has suited all parties involved even though it means leaving the club mid-season. He wishes Lodge the best.

Lodge and his management team had been in talks with the club about his future since the beginning of the year. The club has also since announced the addition of Adam Reynolds and Maroon Kurt Capewell to the team.

Nathan Brown, coach for the Warriors, has said that they look forward to seeing the quality and experience that Lodge will bring to the team. Along with teammates such as Ben Murdoch-Masila and Addin Fonua-Blake, Lodge will certainly take the Warriors to the next level. Additional players joining the Warriors this season includes Chad Townsend and Dallin Watene-Zelezniak to name but a few.