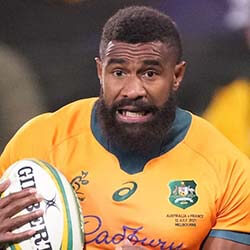 Wallabies’ player Marika Koroibete received a red card after tackling Anthony Jelonch. This has resulted in him needing to meet with the World Rugby judiciary to avoid further sanctions.

He was sent off the field after what has been described as a bone-crunching tackle that hit the ball out of Jelonch’s hands and had him grabbing his jaw as a result of the pain. Koroibete had made contact with Jelonch’s head which resulted in him receiving the red card that sent him off of the field. The crowd went wild when he was sent off, leaving the Wallabies to play with just 14 players. Social media also went into a tizzy about it all.

Koroibete, the only player to have received a red card during the series, managed to avoid further sanction and is now free to be part of the Wallabies’ line-up at the Bledisloe Cup later this month. There were concerns that he would receive a three-week suspension.

The World Rugby judiciary panel declared that the tackle was meant to be a shoulder-to-shoulder contact and that any other impact by Koroibete was incidental. Based on this, the red card was not upheld, and he is free to play with immediate effect.

Now that this has been sorted out, the team can focus on preparing for the Bledisloe Cup followed by the Rugby Championship.

This latest Test series is also the first win for the Wallabies on home soil since defeating the French back in 2014.