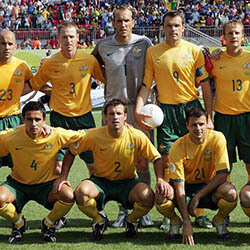 Players from what’s widely referred to as the Golden Generation of Soccer in Australia want to see changes in how the sport is being managed here. The group includes former captains Craig Moore, Lucas Neill, and Mark Viduka, and are agitating for a complete rehaul, starting with the game owning its broadcasting rights and extending to cuts in administration expenditure.

Moore stated that they refuse to accept the current narrative which states that the game is struggling and must fall in line behind other sports and different broadcasting priorities. He said that all that they can see is a talent pool that needs attention and standards and quality far behind where they should be.

Moore went on to say that that the gene pool in this country is such that each generation can be a golden one and that that’s the goal for male and female players in Australia. He mentioned that, as great as it’s been to see how much the women’s game has progressed in the past 10 years, the men have not kept pace. But, he added, this is because the vital pre-conditions for success are simply not there.

Moore said that some of the recent developments in the Football Federation Australia under the new Chief Executive Officer James Johnson are welcome. He specifically mentioned the First XI but said that there’s a lot more to be tackled and that he and the rest of the Golden Generation have an informed opinion on these.