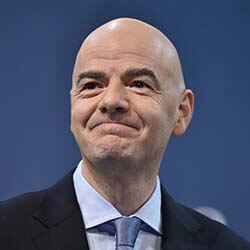 World soccer governing body FIFA is making a final push in support of its pitch for a biennial World Cup.

FIFA claimed on Monday that revenue is anticipated to jump by a crazy $4.4 billion to $11.4 billion over the next four years. But only if a biennial World Cup would be voted into force.

But FIFA president Gianni Infantino has been facing high opposition from leaders of the South American and European confederations – not to mention from the International Olympic Committee (IOC). Even so, Infantino has pushed forcefully ahead in his plight to convince FIFA’s 211 member associations of the many positives he says will be associated with doubling the frequency of men’s as well as women’s World Cups.

The biggest problem with the new model is that it will allow FIFA to dominate the world of sports from a time-frame point of view. Also, this will naturally diminish the available window for other major sports events to shine.

FIFA previously commissioned a financial study to be performed by market research specialists Nielsen and the Open Economics organisation. This particular study’s outcome had been the one presented by Infantino during a recent virtual meeting with role-players.

In addition to an increase in GDP gains well in excess of $180 billion over 16 years, the report also focuses on the value and anticipated growth of sponsorships and television rights.

For the IOC, the biggest concern is potential clashes created in the schedule with other major sports.