Chelsea Advance Above Arsenal After Tie With Burnley 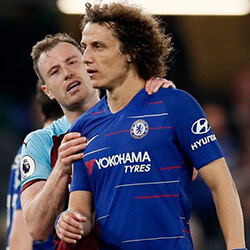 Chelsea has been promoted into fourth position for the Premier League above Arsenal after a thrilling game against Burnley that was played at Stamford Bridge. Despite their advancement, a win against Burnley would have seen them move to third place, two points ahead of the Spurs as Tottenham, Manchester United, and Arsenal all losing their respective games.

The first 24 minutes of the game saw all the goals scored, with Jeff Hendrick giving Burnley their lead at the eighth minute before N’Golo Kanta of Chelsea scored is own thanks to a superb show of skill by Eden Hazard. Gonzalo Higuain pushed Chelsea to the lead just six minutes after Burnley’s first goal.

But the visitors were on level ground when Ashley Barnes scored from close range, making it his 11th goal of the season so far. It also proved to be a frustrating night for Maurizio Sarri’s team as Callum Hudson-Odoi ruptured an Achilles tendon while Kante was forced off of the field with a rib injury, while the boss of Chelsea was ordered to the stand toward the end of the game.

Burnley are now safe from relegation with three games left in the season, and are holding a nine point lead against Cardiff, who are now in 18th place, and with a goal differences of 17 over their Welsh opponents. Chelsea started out in fifth place, and while they have advanced, they’ve also missed the chance to take the third spot.