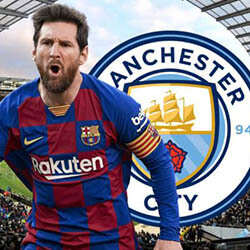 Not only is Lionel Messi pushing to leave behind Barcelona without having to pay as much as a cent in return for his premature departure, but he’s also managed to drag English Premier League side Manchester City into the unsavoury smear.

Man-City has in the meantime offered to “free” Messi by handing over to Barcelona some serious money as well as a three-player trade. But City’s willingness to offer £89.5 million (AUS$163 million) in ransom, along with Bernardo Silva, Eric Garcia, and Gabriel Jesus thrown in as an additional sweetener of the deal, still comes nowhere near Barcelona’s €700 million release fee.

The entire debacle now hangs in the shadow of a much-debated clause in Messi’s contract with Barcelona – one that allegedly permits Messi to opt out of the final year of his contract, which contract expires in June next year, if he so chooses. Free of charge.

But since Messi, in the event that he did want to take advantage of the clause – failed to give Barcelona notice of his intention to depart before the June 10 notice-deadline, Barcelona will most likely end up kicking in their heels and possibly even taking the superstar to court.

And since Messi isn’t willing to part with the gigantic penalty fee, nor Man-City capable of parting with that kind of money, Spanish court is most probably exactly where the dispute will ultimately end.

Once before court, one of two things may happen. A judge may either deem the amount to be excessive, and proceed to lower it to a more “reasonable” departure penalty, or Messi could end up paying the entire amount, and then some in legal costs.

Not exactly the sort of options Messi will be hoping for.