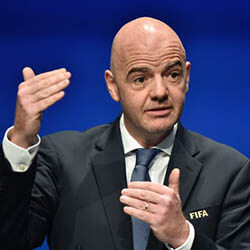 Controversial FIFA President Gianni Infantino has hit back at a Swiss prosecutor’s demands for a criminal investigation over the use of a private jet in 2017 by describing such demands as without base and with ill-intent.

According to special prosecutor Stefan Keller, his enquiries have led him to believe that there exists irrefutable signs of behaviour of a criminal nature in relation to the 2017 flight between Suriname and Geneva. According to a statement recently published on Keller’s website, the matter has now been handed over to the office of the Swiss federal prosecutor.

Infantino and FIFA have in the meantime issued a statement of their own, declaring full intent to take all of the legal steps necessary for defending the innocence of the accused party. FIFA furthermore claims that neither it nor its president have been informed of the apparently “new” allegations levied against Infantino, and as such, are unable to comment.

FIFA in August last year confirmed that its ethics committee had officially closed their own investigation into the matter due to a lack of evidence. Keller however continued to pursue the case because of his own mandate – being that of investigating meetings held between Infantino and former Swiss Attorney General Michael Lauber. Criminal proceedings were eventually opened against Infantino in August this year.

The football governing body seems to take special issue with the fact that Keller’s “method” seems to involve accusations made via unjustified media releases. Keller’s approach borders on defamation and the assassination of character, said FIFA this week.