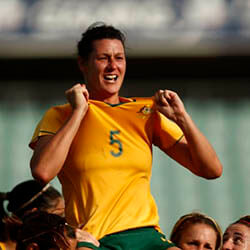 Cheryl Salisbury, the all time cap leader of the Matildas has been officially added to the Australian Sports Hall of Fame alongside a number of other male footballers. Salisbury has been named along with players such as John Warren, Harry Kewell, and Ray Baartz, all of which have been added to the pantheon of Australian greats from the years, with Salisbury being the first Matlida in history to do so.

She is set to be formally admitted at the beginning of next month. Her 151 caps still currently stands as the record, above both female and male footballers, and her 38 goals meant she was the leader for both categories for a long time, with one above Lisa De Vanna. The player represented Australia for the 1995, 1999, 2003, and 2007 FIFA Women’s World Cups, along with two appearances at the Olympic Games in 2000 and 2005. De Vanna and others have credited the player for helping professionalise the Matildas, and her dedication when the team was undergoing struggles just to play has set her apart as one of the greatest Australian players in football history.

Chris Nikau, talking about the induction, stated that Cheryl understood the potential of Australian women’s football in the industry, and that she had made it her mission to transform the sport so that future Matildas would be able to reach their potential and live their footballing dreams. She added that it’s thought Cheryl’s example both on and off the field that they have a thriving Westfield W-League.