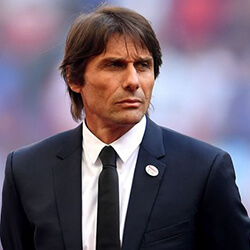 Antonio Conte has been officially named as the new manager of Inter Milan, and is set to take over the role from Luciano Spalletti, who was fired from the position. The 49 year old will be retuning to work in Italy after Chelsea dismissed him at the end of the previous season. Conte spent a total of two years working at Stamford Bridge, where he won the FA Cup and the Premier League, and previously claimed three Serie A titles while he was the boss of Juventus.

Under Spalletti, Inter finished in fourth place for the league, and qualified for the Champions League. Talking about his new role, Conte told reporters that it’s a new chapter in his life that’s beginning, and that he’s really excited. He continued by saying that he chose Inter because of how ambitious the club is, and that he was struck by the transparency of the club and has a desire to bring Inter back to where it belongs.

Steven Zhang, president of Inter, added his own statement, saying that he was sure that Conte was one of the best coaches in the market right now, adding that he was certain that Conte will be able to help them fulfil their mission and to achieve their objective. He said lastly that their objective has always been the same: to make Inter one of the best clubs in the world once again after years of falling behind in rank.