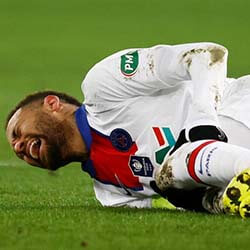 A groin injury is threatening to rule PSG Brazilian forward Neymar out of the Champions League for at least a month.

Neymar after Wednesday’s meet shared his disappointment with fans via Instagram, describing himself to be in immense pain and disappointment. No surprises there, either, since this will be the third time the Brazilian will have to forget about playing in the last 16 stage. Neymar in 2018 missed the second leg of the league against Real Madrid, and in 2019 did a repeat when he missed both games against Manchester United – every time resulting from injury.

The PSG forward this week echoed his father’s opinions about his being constantly accused of inviting being hit and injured. This from a player who in 2015 won the Champions League alongside fellow-Barcelonans Lionel Messi and Luis Suarez. Barcelona has not since been able to find an on-par replacement for Neymar.

Significant and certainly poignant within the context of Barcelona, is that Messi has not won the competition since 2015, when he last had Neymar playing at his side.

Neymar has in the meantime been left to deal with yet another major disappointment over injury, and in his emotional Instagram post spoke about how he would once again have to stop doing the one thing he loved most in the world, which was to play football.

The PSG star will have missed as many as 83 matches resulting from injuries for his current team by the time he’s completed his latest session on the sidelines.