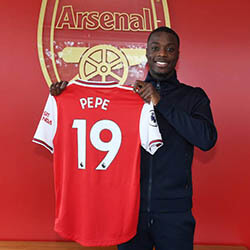 Arsenal has announced the signing on of Ivory Coast winger Nicolas Pepe, who has moved from Lille for a club record fee of £72m. The 24 year old has inked a contract with Emirates Stadium that is expected to last a total of 5 years.

Pepe scored 35 goals in 74 Ligue 1 appearances for Lille, who he joined from Angers in 2017. Talking about the new deal, Pepe said that it was emotional for him, and that he had come a long way and struggled through a lot, and the deal was a big reward. The player is now the fourth most expensive signing in the history of the Premier League Manchester United duo Paul Pogba, at£89m and Romelu Lukaku at £75m, along with Liverpool defender Virgil van Dijk for £75m.

For the 2018-19 Ligue 1 season, Paris St-Germain’s Kylian Mbappe was the only player that had more combined goals and assists than Pepe, who is set to wear the number 19 jersey. Unai Emery told reporters that Nicolas is a highly rated winger who was sought after by a number of top teams within Europe. He added that signing on a top class winger has been part of their objective for this transfer window, and that’s delighted Pepe is joining.

Signing a top-class winger has been one of our key objectives in this transfer window and I’m delighted he’s joining. Pepe was the second player to be confirmed as leaving Lille in recent months.