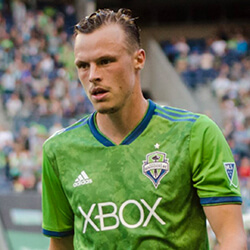 The International Men’s Soccer player Brad Smith has gone over to Cardiff City thanks to a loan deal in place until the English Championship season closes. The Left-Back will be joining the team from Bournemouth, where he has been signed since 2016, although he’s only been on the field five times since then. In fact, Smith has just returned to the Cherries, in November last year, after he completed a successful loan spell in the USA with the Seattle Sounders.

After he missed out on playing for the Socceroos in the 2018 World Cup in Russia, Smith made his way back to the national team in 2019 after showing excellent form playing for the Sounders in Major League Soccer games. The 25-year old started with the Socceroos in both their last World Cup Qualifiers against Jordan and Taiwan and ended his American adventure by playing in a role in the Sounders’ taking the MLS Cup.

Smith was on the books at Liverpool before he headed over to Bournemouth and he’s the first recruit made by Cardiff City Football Manager Neil Harris. Relegated from the Premier League last year, the Bluebirds currently hold 12th place on the Championship ladder, and Harris has stated that they’ve been looking for someone able to compete with Joe Bennett. He described their ideal player as someone attack-minded, with real pace, and able to go up and down the pitch, and said that Smith ticks all these boxes.