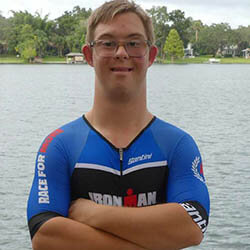 A 21-year-old from Florida in the U.S. has made history by becoming the first person with Down syndrome to make it all the way to the finish-line of an Ironman triathlon. Race officials confirmed the record feat after Maitland resident Chris Nikic put up a stunning triathlon performance on Saturday – finishing nearly 14 minutes ahead of the race’s 17-hour time limit.

The race finished very near 3 hours ahead of the cut-off comprised of a swim spanning a gruelling 3.8km, a 42.2km run, and 180kms of toughing it out on a bike. Nikic finished the chastising race in a time of 16:46:09.

Race officials have in the meantime described Nikic’s superb and exceptional accomplishment as a show of tenacity and endurance that can ultimately be expected to lead to countless new opportunities for others living with the challenges. A statement issued by the organisers of the famous Panama Beach race posted on social media only minutes after Nikic successfully crossed over the finish-line described the athlete’s accomplishment as being a “defining” moment in all of Ironman history.

Nikic’s pre-race training regime involved up to eight hours of daily training – with weekdays typically spent on the bike, and weekends running out on the open road.

Nikic all throughout the swimming and running legs of the race remained connected via tether to his Ironman training partner, Dan Grieb. An experienced Ironman veteran, Grieb following Nikic’s successful finish told reporters how impressed he had been with his fellow-competitor’s determination to never give up.

Kohlberg Kravis Roberts is a giant in the global private equity industry who recently made headlines when it purchased an AU$4 billion stake in the Ultimate Fighting Championship. The organisation ….