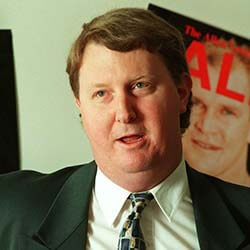 The 59-year-old Queenslander died at St Andrews War Memorial Hospital on Tuesday evening. He passed away nearly two years after suffering a fall in another hospital. The incident left him a quadriplegic.

The reason he had initially visited the first hospital in May 2019 was for routine tests that needed to be run. This was only days before he was set to depart on a dream family holiday in Wimbledon. The fall meant the holiday would never even materialise.

Malone, a former sports editor with The Courier-Mail, will be remembered for the phenomenal courage he displayed during his time in rehabilitation. Doctors and nurses at St Andrews had repeatedly expressed a sense of deep admiration for Malone and wife Sharon.

Though previously a public and well-loved figure, Malone fought the battle to regain physical control over his body in private. And despite fighting his own significant personal battle, he still managed to stun former colleagues by reaching out to them whenever he happened to catch wind of their setbacks.

Throughout his career as sports editor Malone covered more than 100 State of Origins and Kangaroos rugby league tours. He also covered the birth of the Broncos and co-authored books with Allan Langer and Brent Tate.

Malone showed true courage and passion for news coverage when in 2001 he covered the 9-11 terrorist attack on New York City. This had been only a day after he spent two weeks covering the US Open non-stop.

Australians will miss Malone’s incredible love and passion for sport.

A 21-year-old from Florida in the U.S. has made history by becoming the first person with Down syndrome to make it all the way to the finish-line of an Ironman ….