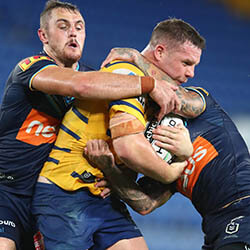 The Australian Football League 2020 season got through just a single round before being postponed, and the AFLW competition got cancelled midway through the Finals Series. No premiers were crowned in the wake of new measures being introduced at both federal and state government levels to try to mitigate the coronavirus COVID-19 pandemic.

New South Wales, South Australia, Victoria, and Western Australia announced on Sunday the 22nd of March that several measures are scheduled to kick in over the next few days to force non-essential services and travel to shut down.

Due to state borders closing as the contagion worsens, national sports competitions have become untenable and pressure is mounting on Football Federation Australia and the National Rugby League, who have been authorised to go ahead with games this weekend, to follow suit.

But neither organisation has advised their leagues to halt yet, with ARL Chairman Peter V’landys saying that the commission intends to proceed with matches until the government tells them to stop. FFA Chief Executive Officer James Johnson has said that they’re waiting for further advice as well.

Gillon McLachlan, AFL CEO, stated that his industry is facing an unparalleled challenge and that the financial ramifications of the measures being undertaken to contain the outbreak are going to be felt far and wide. He spoke of his business as providing livelihoods for thousands but said that their key focus right now like it is for everyone else in Australia, is to help slow the spread of COVID-19 and to keep as many people as healthy as possible.

A Quartet of Irishmen’s AFL Dreams

Frank Irwin and Oisin Mullin from County Mayo, Ultan Kelm from County Fermanagh, and County Clare’s Cillian Rouine have all been extended invitations to Australia after making their mark at ….

Alex Rance has stunned the AFL community after he announced that he was bringing his distinguished 200-game career with Richmond Football Club to an end. Commentators, fans, and players alike ….

Australian Rules Football is one of the most violent sports in the world. 36 players hurtle across the field, exposed to blindside cuffs, erring elbows, shoulder collisions, and culpable knee-jerks. ….

It was confirmed in August 2018 that Sam Murray was being investigated by the Australian Sports Anti-Doping Authority, and he was provisionally suspended after returning a positive test in that ….

The Australian Football League has just renewed its long-standing partnership with the car manufacturer Toyota in what looks to be the biggest-ever sporting sponsorship deal in the corporate history of ….