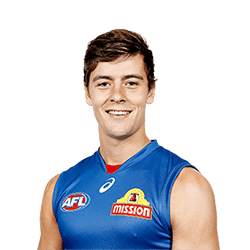 After finally returning to the team after his shoulder reconstruction surgery, Bulldogs’ Josh Dunkley is once again facing adversity. He is now stuck in isolation for 14 days. He is easily the AFL’s most unlucky player.

He joined the team for last Saturday’s game against the Gold Coast Suns, however, his time on the field was short-lived, and he will need to catch the next game from the comfort of his own home. This is not a result of being cut from the team or suffering another injury, instead, it comes after he visited a local café which was declared as a COVID-19 exposure site shortly thereafter.

This unexpected event seems to have come out of nowhere as the area had not experienced COVID-19 exposures for quite some time. So, when the player found out it was an exposure site, he was shocked. He says that receiving a text message from the government telling him to isolate was a crazy experience and something that he will never forget.

Dunkley has received a lot of support from family and friends, with people regularly checking in to see if he is okay. Everyone has offered to help him where necessary, which has helped to make the transition a lot easier.

For most people, staying at home would leave them bored, but luckily for Dunkley, he has training equipment to help him maintain his fitness levels during this time. This will make his return to training in two weeks easier. While his home setup will be making the process easier for him, there’s no denying the frustration of yet another setback.