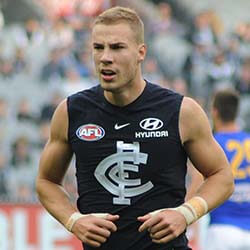 Carlton’s forward Harry McKay has reaffirmed his commitment to the club by re-signing for the next two years. He hopes that during this time, the club will be able to win its 17th Premiership.

During the first 11 games of the season, he has managed to score 38 goals and has received the attention of international audiences as a result. He was first drafted in the 2015 AFL draft and has kicked a total of 109 goals from 60 games since 2017. It will be interesting to see how this number changes in the second half of the year and beyond.

Since joining the club, McKay and the team have been through a lot and continue to build on their ongoing development as players. As a team, they are striving for their 17th Premiership win to make fans proud and show off their skills.

McKay has stated that it is an honor to play for the team and that he will do everything in his power to make this goal a reality. He looks forward to the second half of the year as the team takes their performance to the next level.

Prior to announcing his re-signing with Carlton, reports were circling that McKay had received interest from Hawthorn, Essendon, Collingwood, and North Melbourne. All of this aside, the team knew that Carlton had no intention to leave and sign with another. He has positioned himself as a leader of the club through hard work and dedication.