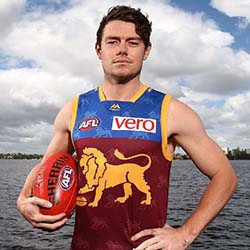 During their game against Geelong this week, the Lions thought the worst when Lachie Neale was brought to his knees following a shoulder injury. He left the field after falling onto his shoulder, only to make a speedy return and continue playing.

The midfielder may have injured himself with a dislocated shoulder, but it was not enough to stop him from playing. The Lions had been dominating their opponents, however, when Neale left the field, their stomachs sank, and they began to expect the worst. This is only the third game that he has been able to play since recovering from an ankle injury earlier this year.

When he went down, it did not look good. He went off the field in a mix of trainers and medics and returned a few minutes later more eager than ever to play the game – surprising his team, their opponents, and the spectators. The Lions went on to win the game and killed Geelong’s six-game winning streak. This was also Lion’s ninth win out of the ten games played. Of course, the win could come at a cost as Neale needs to deal with his injured shoulder after playing on.

By quarter time, the Lions were in the lead with 30 points, 43 points by halftime, and 43 points by last change. The outstanding backline certainly played an important part in the team’s success, which was made all the more sweeter by the fact that they had crushed Geelong’s winning streak.