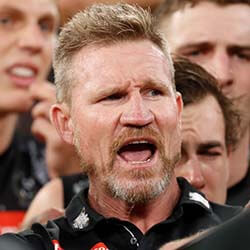 For 10 years, Nathan Buckley has been coaching the Magpies. His time with the team did, however, start long before that as he is also a former player with 260 matches under his belt.

The reason for his departure remains a confusing topic, however, an appetite for change within the club has been a recurring theme. He has spent a lot of time with the club and is grateful for the experience. Of course, he is sad that it will all be coming to an end.

The future of Buckley’s career was brought into the spotlight following the season’s poor results with only three wins recorded. Some of the team have mentioned that the tired tactics used by Buckley were to blame.

It is clear that the team is in need of positive change and as a result, the programme does need to change. Buckley agrees that a different approach is needed if the team is to succeed. Even though the change was needed, it does not take away from the shock and disbelief by many as a result of the news. This is not the first news to shock the club, as a salary cap at the end of the previous season says key players leave the team.

His final game with the team will be the Queen’s Birthday clash with Melbourne. This will also be his 218th game as team coach. Robert Harvey will step in and take over for the rest of the season.