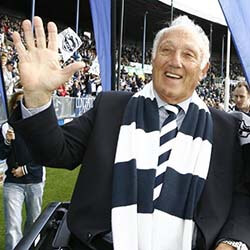 Legendary Geelong president and philanthropist Frank Costa has died. The 83-year-old, following a year-long battle with illness, died in his sleep on Sunday morning. Costa was the only person ever to have been named a legend of the AFL club without having ever played a single game for the Cats.

The long-time president of the Cats took over the presidency back in 1998 at a time during which the club had been in serious financial trouble. He would ultimately go on to oversee a recovery of epic proportions that led the club to one of the most successful eras in its existence. Under his guiding hand of leadership, Geelong won flags in 2007, 2009, and 2011, before handing over the presidency to Colin Carter.

Geelong CEO Brian Cook said in a statement on Sunday that Costa had been a true legend, both as a person as well as within the context of the AFL club. Cook said Costa will long be remembered for his ability to form long and lasting relationships through authenticity and warmth, and that he’ll be sorely missed by all who knew and loved him.

By the time Costa took his leave from the club at the end of 2010, said Cook, he left the club with a legacy of state-of-the-art facilities and a record-breaking team that had successfully managed to end a protracted premiership drought. Cook said Costa had also managed to set the club on a road of financial security – without which the club would in all likelihood not have existed today.

Costa is survived by his wife Shirley and the couple’s eight daughters.

The Adelaide Crows have been fined a whopping $50,000 after players and staff failed to correctly wear their face masks on a flight back home from Sydney after playing Richmond ….

This year’s AFL season has shuddered to a sudden halt in the wake of new COVID-19-related restrictions announced by the state of Victoria on Tuesday. The AFL is now awaiting ….

Harris In Search Of A Club After Talks Fail

AFLW player Tayla Harris is in search of a new home after pay-talks broke down irretrievably with management at Carleton. Blues coach Daniel Harford disclosed the reason for Harris’ departure ….