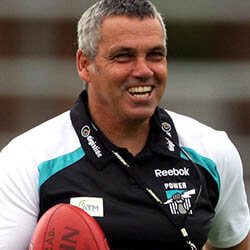 Former Richmond AFL premiership coach Mark “Choco” Williams will four years after he departed the Tigers be returning to an AFL club. Melbourne on Tuesday confirmed having signed Williams as their new head of development. The Demons will be the second AFL club served by Williams in a development role after he served Richmond in a similar capacity across 4 seasons spanning 2013 to 2016. During his time at Richmond, he played a leading role in mentoring players like Alex Rance and Dustin Martin.

Williams during the lead-up to the cancelled 2020 VFL season signed a three-year deal with Werribee. He also led the Tigers all the way to the 2019 AFL Grand Final.

The 62-year-old is according to Demons football performance boss Alan Richardson a coach with a fantastic ability to develop players while maximising their full football potential. He’s passionate about sport and a phenomenal football person, said Richardson, who added that he’s personally looking forward to seeing the impact of Williams on especially the development of younger and emerging players, as well as on the club in general.

Before Williams turned to coaching, he was a four-time SANFL premiership player and two-time Collingwood best. Following his appointment in the role of senior coach for Port Adelaide in 1999, he would go on to lead them to an impressive four top-four finishes. He took them all the way to the Grand Final in 2007.

Williams moved to the Sydney Giants in 2010 before eventually making the transition to the Tigers in 2013.

Western Bulldogs star Jason Johannisen has been dumped. The Bulldogs during a “shock” team announcement on Thursday night confirmed the makeup of the team about to take on Collingwood in ….

The AFL’s decision-making powers have now made a decision on whether to repeat last year’s night-time format for this year’s Grand Final. The decision was made that it will be ….

The AFL this week confirmed that players will henceforth be sidelined for at least 12 days following a severe concussion and/or head injury. The stricter protocols will apply to the ….

The AFL has confirmed having extended its broadcast agreements with partners Telstra and Foxtel for at least three more years. Foxtel’s broadcast deal was initially set to run only until ….

Rapport Between Pies And Treloar “Toxic”

Adam Treloar’s relationship with Collingwood, so says a prominent sports reporter, can only be described as “toxic”. The source of the theatrical show of drama currently at play between the ….