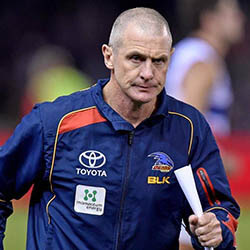 Cy Walsh, 31, the son of murdered Adelaide Crows Australian Football League coach Phil Walsh, has reportedly received the go-ahead from court to join his mother on day-trips out in the community.

The 31-year-old has been detained under court-ordered mental health supervision ever since a Supreme Court ruled him “incompetent” at the time of the stabbing of his famous father in July of 2015.

The concession made in favour of Walsh is a significant relaxation of the initial order handed down. Walsh previously spent a total of five nights every week at low-security mental health facility Ashton House, with the remaining two nights spent receiving mental health medical treatment at the highly secure James Nash House. But following the most recent ruling by Justice Anne Bampton, Walsh will not get to reside permanently at the lower-security establishment of the two.

Bampton furthermore also conceded to allowing Walsh intermittent visits into the community – but on condition that he is at all times accompanied by a single responsible support person. Said person could reportedly include his own mother, namely Meredith Walsh.

Now accepted as such to have suffered from undiagnosed schizophrenia at the time of his father’s murder, the 31-year-old was ultimately found not-guilty of the death of Phil Walsh. Cy Walsh repeatedly stabbed his father in the chest at the family’s Somerton Park home in Adelaide.

According to attending expert psychiatrist Dr Paul Furst, who assessed Walsh for an extended period of time following his father’s death, the patient most likely suffered from serious mental illness for a significantly longer period of time that what those around him would have been aware of.

She will not tolerate any more incidents involving AFL players caught breaking biosecurity rules, says Queensland Premier Annastacia Palaszczuk. This alongside calls from her office for the banishing from the ….

Richmond compatriots Nick Vlastuin and Dylan Grimes have been cleared of the respective charges of staging levied against them by the AFL. This after written appeals laid before the AFL ….

AFL Players Will Compromise–But On Condition

AFL players playing for Australia’s ten Victoria clubs are in agreement with the league’s plan to cram as many games into the next couple of weeks as possible, says AFL ….

South Australia has seriously hampered the Australian Football League’s season restart timeline. This is after they told the League that no quarantine exemptions will be given to players from Adelaide ….

Nathan Charles Buckley, Australian Football League coach as well as former player and mentor, wants things to get back to normal and is making no bones about how we can ….