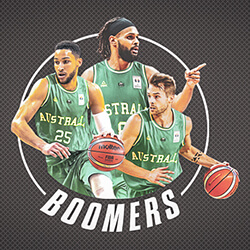 Will Weaver has just been appointed as coach for the Boomers for the Asian Cup set to unfold in February. This means that he will almost definitely be in place when the Tokyo Olympics begin on the 24th of July this year.

Basketball Australia has just announced their extended 24-man team for matches they’ll play against New Zealand at home and against Hong Kong away. They face the Tall Blacks at Brisbane’s Nissan Centre on the 20th of February and then head on to China three days later.

The squad is being headed up by veteran players like Cameron Gliddon, Chris Goulding, David Barlow, Mitch Creek, and Nathan Sobey, all of whom contributed to Australia’s fourth-place finish at the FIBA World Cup in 2019. Promising talents like Daniel Grida from the Wollongong Hawks, Kouat Noi from the Cairns Taipans, and Will Magnay from the Brisbane Bullets also made the cut, but no one from the Perth Wildcats or Sydney Kings will be playing. This is because both teams have all but secured spots in the NBL playoffs, and these begin on the same weekend that the Asian Cup does.

Weaver, who currently coaches the Sydney Kings, was previously an assistant coach to coach Andrej Lemanis, who stepped down in November 2019. It’s been rumoured that Weaver would be retained by Brown who won’t be able to attend the qualifying games as he tries to take the Philadelphia 76ers into the NBA playoffs.