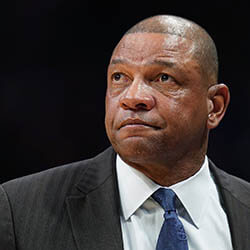 Rivers, who replaces the fired Brett Brown, during his time spent coaching the Clippers led the franchise to six of out of seven playoffs. And now that he’s done coaching dynamic Lakers duo Kawhi Leonard and Paul George, he’s about to do the same for Joel Embiid and Ben Simmons.

Brown was let go following his team’s first-round Eastern Conference playoffs sweep by the Boston Celtics. This after seven seasons spent coaching the 76ers, and with a 221-334 record.

Rivers has in the meantime thanked the “Clipper Nation” on Twitter by expressing his gratitude at having been “allowed” to coach the side for so many years – as well as for those efforts that went into turning the franchise successful. He also elaborated some about his initial goals – including making of the team a “successful basketball program” and an organisation open to free agency.

Embiid has in the meantime welcomed Philadelphia’s newest head coach to the “city of Brotherly Love”, while tweeting about his excitement about the future about what the franchise is busy building with sights set on years to come.

But there’s supposedly another side to the story also. Losing three golden opportunities to the Nuggets, which negligence cost the Clippers the opportunity to play opposite the LA Lakers in the Western Conference finals, is rumoured to more likely than not have played a deciding role in Rivers’ sudden exit.