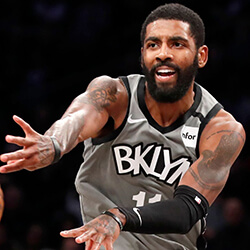 NBA superstar Kyrie Irving has pledged an amount of $1.5 million in aid of Women’s National Basketball Association players who prefer to opt out of the 2020 season out of either health concerns or social justice concerns. The money committed to by the NBA star will be donated by Irving’s newly launched KAI Empowerment Initiative and will in addition to the support made possible to WNBA players, also provide interested players with financial literacy aid presented in partnership with UBS.

In order to qualify for the help made available by Irving and his initiative, players are required to submit to the program their reasons for wanting to opt out of the current season. Those players already receiving monetary assistance from any other avenue or charitable institution, are not at liberty to apply and will not be considered for approval.

The WNBA has adopted the leadership position in pushing hard and fast for social chance. Players now wear the name of Breonna Taylor on the back of their jerseys. Taylor died at the hands of police officers in her Louisville-home in March this year.

Irving’s own voice has been one constantly bellowing for change across the plains of social injustice. He made no secret of his unhappiness at having to play a 2020 season whilst isolated at Disney World in Orlando.

But that Irving has paid the women’s league a huge favour by creating the initiative cannot be denied. This is a league where the salary at the very top of the value-ladder only just exceeds $200,000.