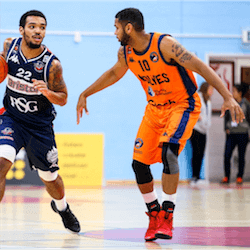 This year’s BBL Cup Final will see Worcester Wolves and Cheshire Phoenix looking to win the BBL Cup.  The pressure is on and Cheshire Phoenix coach Ben Thomas is attempting to lead a team to a showpiece event for the first time ever.  Thomas seems to be preparing mentally for the challenge, having recently told the press that the secret, or so it seemed to him, was to prepare the team as if it were just another basketball game that had to be won, instead of letting the pressure of a showpiece event get to one’s head.  The coach said that this would help him (Thomas) keep his emotions in check and lead his team to victory.

Cheshire Phoenix will be up against an experienced Worcester Wolves side, coached by three-times BBL Cup winner Paul James.  It doesn’t help Phoenix’ cause that the Wolves have both times that the two sides have recently met, but Thomas is banking on a third time lucky.

The Worcester Wolves are reportedly overwhelmed by support from fans as they prepare for the challenge at Arena Birmingham on January 28th.  More than 600 fans have signed up to support their team and will be making their way over to Birmingham on Sunday.

Worcester Wolves team captain Alex Navajas has thanked fans for their support, saying that the “Wolfpack” was the sixth player in the team and that the team owes much of its success to those who loyally support it.

Birmingham Arena manager April White has confirmed that a 600-strong Wolfpack will indeed be present in the arena on Sunday.  White also said that the decision last year to cut season-ticket prices had led to a huge increase in sales for this year, and that this was admittedly a move in the right direction.  The increased number of spectators set to turn up at events would ultimately have a positive impact on the overall performance of the teams.

Cheshire Phoenix Back For First Time Since 2010

Cheshire Phoenix will be relying heavily on the flying British forward, Orlan Jackman.  Jackman was a cup winner with the Eagles last year.  CJ Gettys is also bound to draw a lot of attention, having been making headlines since graduating from rookie season.  Malcolm Riley is another possible game-driver and winner.

Cheshire Phoenix makes its first return to the BBL Cup Final since 2010.