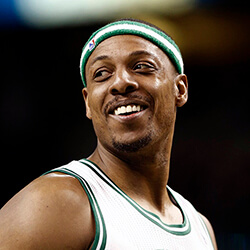 From 1st to 6th October, the “You’re a Legend Tour” will feature six days of activities across Melbourne and Sydney, coinciding with the Australian sports calendar’s biggest week, with UFC243, the NRL Grand Final, the NBL 2019-20 season tip-off and the AFL Pro Combine. In addition to other Australian musical and cultural icons, the 10-time NBA All-Star will participate in a number of activities around multiple sporting events.

The tour will be the first time Australia has been visited by the 2008 NBA Champion and Finals MVP, giving sports fans across the country a rare opportunity to engage with the former Boston Celtic, Brooklyn Net, Washington Wizard and LA Clipper.  Australia has become a basketball powerhouse in latest years with 10 Aussie teams on NBA rosters this season, with Pierce coming to check out the Down Under intervention for himself.  In pursuit of its first global prize, Australia produced its first piece of basketball history, beating Lithuania 87-82 at the FIBA World Cup in China.

It’s the first time the Boomers have been prepared to go 3-0 to begin a World Cup tournament, going through the preliminary phases of the event unbeaten with victories over Canada, Senegal and now Lithuania as the strength of the side continues to grow in pursuit of a medal win. Before the World Cup, a victory over Team USA in Melbourne has the Boomers flying high and the team will now move with high morale into the next round.