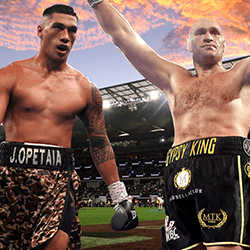 Tyson Fury’s promoter, Bob Arum, has let it be known that talks have been initiated for The Gypsy King to face off against Jai Opetaia in Australia next year.

Fury recently revealed that he wants to fight Deontay Wilder for the third time and also bump fists with Anthony Joshua before he retires from boxing. But Arum has obviously prioritised Opetaia and the pair are set to meet at the Sydney Bankwest Stadium in 2021. The 24-year-old Opetaia is currently undefeated, with a record of 19 wins but would need to win a Cruiserweight World Title before being able to step up to the Heavyweight division.

Rumour has it that Fury would earn almost AU$30 million from the fight. Arum said travelling would be no issue and that the event will be a big one. He explained that he hopes to be able to stage it on a Sunday morning because this would mean a Prime Time slot in the United States of America.

In other Fury-related news, Anthony Joshua is hoping to face off against him later on in 2020. This will happen if the pair win their next fights, as this would take them both through to the Heavyweight Championship in December 2020.

Joshua spoke of Fury enjoying a high point in his career at the moment thanks to his February 22 win over WBC Heavyweight Wilder, but added that should Fury and he ever get matched up, the boxer will be facing one of the young guns and he might not fare so well!