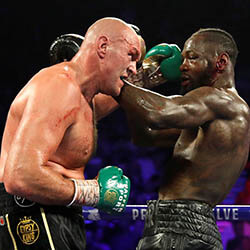 The Trilogy Fight between Tyson Fury and Deontay Wilder has received an offer to be hosted by an Australian stadium on Christmas Day this year and promoter Bob Arum is seriously considering it. Their third meeting for the World Boxing Council’s Heavyweight Championship has been targeted for November or December 2020, but it must unfold in front of a crowd, says Arum. He’s the American-based promoter for Fury and has let it be known that Australia, China, and Las Vegas were all in the running.

Dean Lonergan MNZM has revealed the details of his proposal, saying that it was suggested that the match be held at Bankwest Stadium, which can hold roughly 45 000 people. It’ll be the middle of summer he said, and 170+ countries the world over would be viewing drone shots of the Sydney Opera House, the beautiful harbour, and the incredible bridge. He said that it could go into Melbourne and Marve Stadium, where 50 000 people recently came together for the UFC, and the Suncorp Stadium in Brisbane is also a possibility. Londergan said that it would be a nice touch to hold the fight on Boxing Day as a nod to Jack Johnson’s victory over Tommy Burns in Rushcutters Bay in 1908.

Lonergan and Arum recently worked together to stage the Manny Pacquiao vs Jeff Horn fight in Brisbane three years ago. The UFC hosted Ronda Rousey’s infamous loss to Holly Holm in Melbourne.