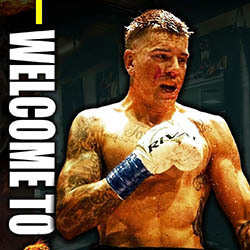 Light Heavyweight boxer Dylan Winter, or The Winter Soldier, has signed a contract with Dragon Fire Boxing, one of the most powerful management forces in Oceania. He’s making his way up the ranks steadily, having reached 3-0 as a professional fighter, with his last bout seeing him beat Serbian Vasilije Radovic via a unanimous decision.

Discussing his recent victory and his ambitions for the future, Winter spoke of how happy he is about the last fight and said he is very grateful to Tolj for giving him that opportunity. He described The Thunderdome Series as an iconic part of Boxing in this country and said that being able to fight there means a great deal to him.

He said that he wants to keep on being honest and real in the ring and giving people value for money whenever he fights.

Winter also weighed in on his decision to sign up with one of Australia’s Boxing linchpins, Tony Tolj. He said that being able to link up with Tolj, who played such an integral role in the rise of one of his heroes, Chris John, is a huge deal. He went on to thank Tolj and the Dragon Fire Boxing team for giving him this chance.

Winter said that Tolj is well-known for getting his fighters great opportunities and said that there’s no reason he won’t do the same for him. The fighter spoke of believing that he’s got what it takes to take titles when the time is right and said he’s willing to work hard to get where he wants to be.