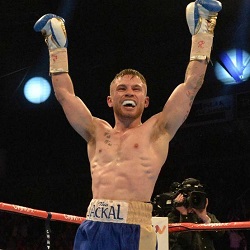 Carl Frampton won the vacant WBO interim featherweight title after winnings against Nonito Donaire in April this year. He is now set to defend his title against Luke Jackson in a mandatory that will be taking place in mid August.

The match will be held at the Windsor Park in Belfast, home of the Northern Ireland football team, and capable of holding up to 25000 fans.

Luke Jackson, 33, is an Australian featherweight who has never lost a professional fight to date (16-0-0). His career includes seven knockouts, as well as a bronze medal from the 2006 Commonwealth Games, and he participated in the 2012 Olympics. He turned professional in 2013, and his match against Frampton will be his first bout in Europe.

Carl Frampton, who holds the WBO interim featherweight title, is the former world champion in two weight classes. He first held the WBA Super, and then the IBF Super-bantamweight titles between 2014 and 2016. He went on to claim the WBA featherweight title for a year from 2016 to 2017, and has held titles at both the Commonwealth and European level while fighting in the super-bantamweight class. Frampton is also the second boxer from Northern Ireland to have held world titles in two different weight classes over the years, and was recognised as fighter of the year by ESPN.

Despite Jackson’s untarnished career, he will be fighting Frampton on home ground, and the odds are currently in the favour of Frampton.