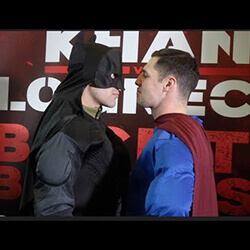 In an amusing publicity stunt, Sean Dodd and Tommy Coyle arrived at a press conference dressed as Batman and Superman. The dress up was clearly referencing the popular showdowns between the two super heroes, and likewise relating to their own upcoming fight. The dress up stunt got plenty of laughs, and the two even engaged in a bit of lighthearted play fighting.

The fancy dress stunt occurred at the Hilton Hotel in Liverpool, where Dodd and Coyle were promoting their fight, set to go down on the 21st of April. The fight in question is, of course, for the Masher’s Commonwealth lightweight title, due to take place at the ECHO Arena.

But the fight between Dodd and Coyle is only part of the event organised by Eddie Hearn, and Matchroom Boxing’s so called ‘Back To Business’ card. Many will be looking forward to the Dodd and Coyle fight, but the the highlight of the even will be the long-awaited return of Amir Khan, who will be pitted against Canadian Phil Lo Greco.

During the interview, Dodd promised fight fans a good old fashioned, action packed match. He made mention of his knock out, which occurred back in July 2013, for the same title against Derry Mathews. How it goes for Dodd this time remains to be seen.

There were no comments about Dodd being dressed as the weaker character Batman, and Coyle the virtually unbeatable character Superman.

Tony Bellew made news when he sank his teeth into his current opponent, David Haye, telling reporters that he believes Haye is a, “wounded and desperate animal” at a recent ….

Phil Lo Greco has sent an ominous waning to World Champion Amir Khan, stating that Khan needs to start looking at his options outside the ring in a bid to ….